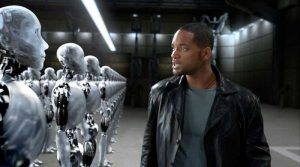 Hi there!  The title of my post comes from I, Robot the movie.  In it, Will Smith playing detective Del Spooner realizes that the US Robotics Robot Factory is being run almost 100% by robots.  I love this movie because I am a big fan of robots and especially Isaac Asimov’s ideas about robotics. I don’t share Detective Spooner’s view of robots, but I think it makes for a great post title.

This posts follow my recent post, “Why Can’t We All Just Get Along?” as sort of a companion piece on my thoughts of the future.  I was talking to my wife about what makes my Slobots different than other robots.  I envision them as friends and companions, but they also have a rare human quailty… hope.  They have hope but they also want to inspire hope.  I try to do that in each Slobot that I make, even when they are a little melancholy, they still have hope.

I prefer to think about a future where technology is NOT running rampant.  Where robots are our friends, not our overlords.  They are trusted companions and we all work together.  I like that idea so much, that in the Slobot universe robots and humans help each other out. I have a series called the Slonkabots that are loosely based on Willy Wonka’s Oompa Loompas.  They are the robots behind the robots – expertly and carefully crafting new Slobots that come out of the Slobot Factory.

You might say, Mike Slobot, you are living in a dream world. well, maybe, maybe not – but why not hope for the best instead of expecting the worst? I think the future can be what we make of our time now, so I guess we’ll see.  We could just try being nice to our robotic friends, and our human ones as well.